In stock
Brand:Изотех и Ко
Country of manufacture:Ukraine
Contact supplier
Description
Cable of the increased safety of NHXH FE180/E30 fire-resistant halogen-free
It is used in buildings with a large number of people and valuable things

Type: a fire-resistant halogen-free cable of the increased safety, according to the DIN VDE 0266 standard.

- preservation of function of isolation in the conditions of fire influence: DIN VDE 0472-814 is at least 3 hours old, 800 °C (FE 180), IEC 60331.
- preservation of function of a cable in the conditions of influence of fire with the fixing and bearing system: DIN 4102-12 within 30 minutes (E30).
Rated voltage: 0,6/1 kV.
Test tension, alternating current: 50 Hz, 4000 Century.
Application: Halogen-free, the increased safety, a fire-resistant cable. It is applied to continuous laying on, in and under plaster, in dry, damp and wet rooms, and also in a stone laying, a wall and in concrete, except for direct laying in concrete during the jolting and consolidation. The cable can be applied in the open air. Laying of a cable to the soil is allowed, but when laying in protective hoses and pipes.
Design:
Vein: copper, monolithic or multiwire, according to the DIN VDE 0295 standard kl.1 or kl.2
Isolation: a special impregnating agent — the structured fireproof polymer keramiziruyushchiysya from fire influence, according to the VDE 0207 standard section 22.
Cover: the structured fire-resistant polymeric compound of orange color according to the VDE 0207 standard.

Cable for immersion in DRINCABLE water
In stock 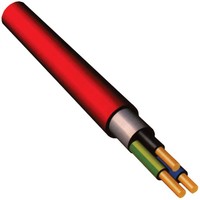